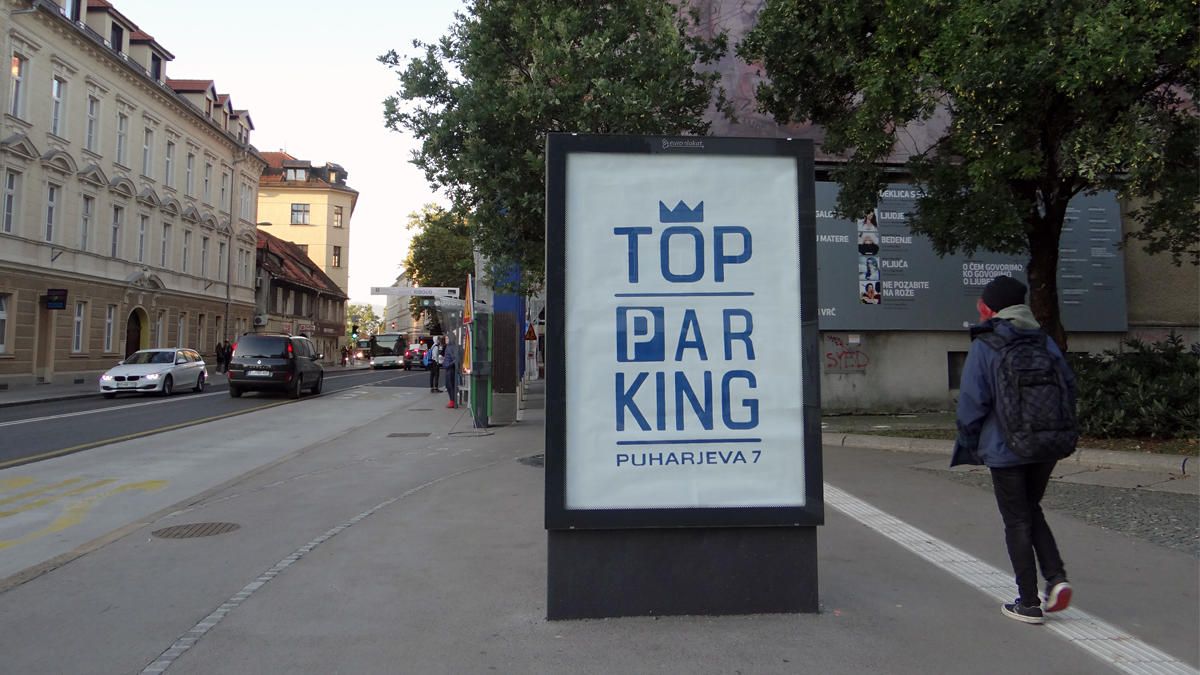 Part of U30+ production programme for supporting young artists.

The TOP project by Danilo Milovanović is an artistic intervention commenting on the increasing gentrification of urban space in Ljubljana, focusing on the emergence of a growing number of parking lots. Selected through U30+, Aksioma’s initiative supporting the work of Slovenian emerging artists, this production will be presented to the public in the form of a solo exhibition at Aksioma | Project Space.

As a resident of Ljubljana, Milovanović has witnessed significant changes in the city, which are the result of following global development standards, with an emphasis on revitalisation and, consequently, gentrification. Today’s cities face the distinct problem of high traffic and the lack of parking spaces, a challenge which opens up opportunities for new businesses in the form of public or private, temporary or permanent parking lots. In both cases, we can witness minimal investments in infrastructure that allow for easy and regular earnings. Yet, despite the very favourable position of the owners, the working conditions of the employees in the parking lots are often extremely poor. The lack of urban standards and appropriate regulations for such phenomena results in a severe degradation of the urban landscape, which is even more pronounced in relation to ambitious interventions that lead to gentrification.
Within the TOP project, the artist deals with this topic through a series of guerrilla interventions, meant as practical strategies of artistic-activist critique of such negative trends, offered to a civil society that is exposed to them on a daily basis, but apparently has no influence on them. Milovanović playfully created a symbolic parking lot on a location inaccessible to vehicles – the roof of an underground garage – thereby taking away its primary function and displaying it as pure form: a recognisable grid of white geometric lines, complementing the scene with a colourful booth made from recycled advertising banners of actual parking lots.
Absurd as it is, the intervention works as a visual depiction of an urban problem. In the follow up of the project, Milovanović promoted the newly created parking lot by transforming the existing city posters into his own images, thus relating the issue of parking to an even more invasive problem of visual pollution, ironically using a strategy of aggressive advertising in the form of marked hyperbole and competitive injustice.

The title of the project plays with the meaning of the word top, which obviously refers to the location of the parking lot, but in colloquial Slovenian also represents the culmination of the good or the best without competition.

Born in 1992 in Banja Luka, Danilo Milovanović graduated from the Academy of Fine Arts and Design in Ljubljana, where he is currently completing his postgraduate studies. In his practice, he mainly expresses himself in the public space, with the medium and approach determined by the artistic concept. In particular, he explores the characteristics of the urban landscape in relation to nature or culture, as well as the possibilities of artistic activity and intervention in the public space. For the most part, his works are fleeting, non-spectacular and emerge beyond the comfort zone of artistic creation. The results of these interventions are both poetic and more radical, activist gestures that can be easily overlooked or remain unnoticed within the dynamics of public spaces. In his projects, he often uses simple elements to create particular meanings, situations or newly established relationships between objects or entities.

Supported by:
the Ministry of Culture of the Republic of Slovenia and the Municipality of Ljubljana.

Aksioma’s programme is additionally supported by the Ministry of Public Administration as part of the public call for co-financing projects for the development and professionalisation of NGOs and volunteerism.